On top of San Cristobel Hill. There are some mountains in the distance somewhere.

When we arrived in Santiago a thick, hazy fog shrouded the famous Andes Mountains – that seem to be visible from almost everywhere in Chile and which have become an emblem of this part of our trip – so they were barely discernible to our tired, sleep deprived eyes.

Throughout our 12-hour bus journey to Santiago we’d been held prisoner in our seats  by the people in front of us pushing their seats back so far we could barely move our legs.(still, as Bolivia approaches I feel I may regret whining about the buses in Chile).

We then had some trouble finding our apartment, so drove around and around the city with an exasperated taxi driver, who then just dropped us off in the rough vicinity of where we believed our hotel to be. Eventually, we found it and all was good and well in the world again. 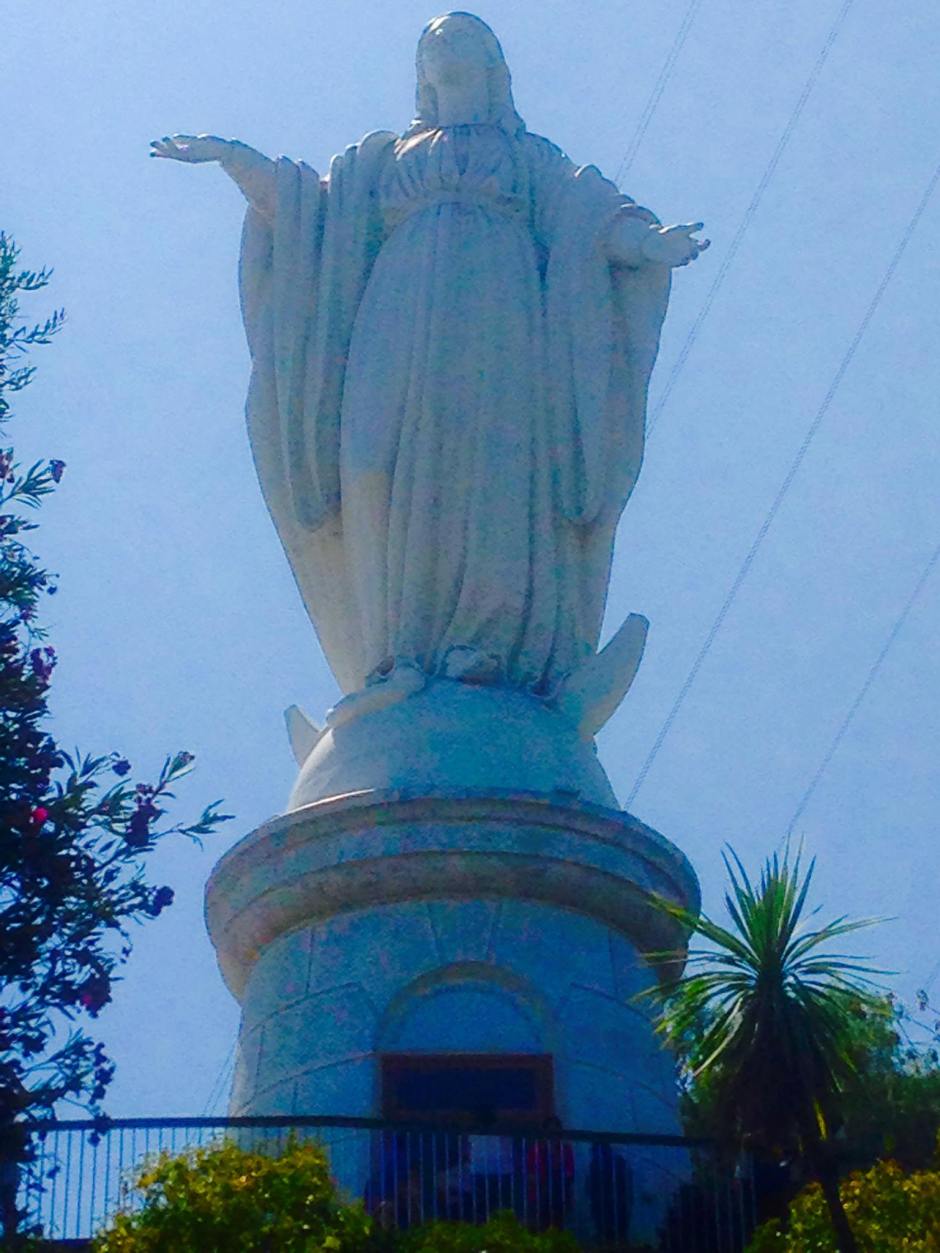 The first thing we decided to do was take the funicular train 300m up to San Cristobal Hill.  I felt a bit uneasy on the train – it seems so very unnatural to be on a train that is near vertical!

The top of the hill offers good views over the city – though the balmy haze had barely lifted so visibility was limited. However, from here you can see how the mountains hug the city, protecting it from the wind, resulting in a hot, sticky temperature.

The peak of the hill is home to a sanctuary dedicated to the Immaculate Conception, with a 22-metre statue of the Blessed Virgin Mary which presides over the city, and an amphitheatre and a chapel.

San Cristobal is a reverent reminder of how Chileans, to an outside observer, seem to be a considerably religious bunch. (In fact, as of 2012, 66.6% of the Chilean population over 15 years of age claimed to be of Catholic creed.) It’s a common sight to see people cross themselves as they pass one of the many religious icons scattered around the country.

We decided to walk back down the hill, which, just let me warn you, is a lot longer than the 5km the guy in the office told me it was. And it’s not a straight winding road down, so it’s quite easy to get lost – not always fun in the blazing 30 degree mid-day sun. (I’d assumed San Cristobal was like The Peak in Hong Kong, which is very straightforward to walk down).

This night we had a fine dining experience at Borago which you can read more about here.

One of the most interesting things we did was go to the Museo de la Memoria y los Derechos Humanos (Museum of Memory and Human Rights).

It’s estimated that 40,000 people were disappeared, tortured or executed during this period. The museum chronicles this period. It has excerpts of newspaper headlines from the state-controlled media at the time, video, personal accounts and much more.

Particularly poignant was listening to the speech by the ousted president Salvador Allende reminding his people to stay strong. He remained in the Presidential Palace, that we’d visited the day before, as it was bombed, apparently shooting himself before he was captured.

Perhaps one of the saddest stories detailed in the museum was that of a 10-year-old boy who  disappeared and was later found dead, most likely tortured and killed by the regime.

We also saw videos from the ‘yes’ and ‘no’ campaign ahead of a referendum in the late 80s/90s that would decide whether Pinochet would stay in power or not. I think the bright colours and optimism of the ‘no’ campaign showed the ability of the Chileno people to remain optimistic in the face of such adversity. If you’ve ever seen the film “NO” film by Pablo Larrain and starring Gael Garcia Bernal this will resonate with you.

It’s true, Santiago is no Buenos Aires. It’s much smaller, has less amazing architecture and less fancy museums. But it’s still a great city in my eyes.

Bellavista, which is near a University, has nice bars and restaurants and chilled student vibe.

One night we saw an amazing student steel band in which girls banged hard on large drums while stomping their feet and throwing about their heads in time to the music. It was pretty mesmerising.

At the palm tree-lined Plaza de Armas we watched traditional Chilean dancing called Cueca. The dance apparently tries to re-enact the courting ritual of a rooster and a hen. Men and a women dance around each other, one shaking a hanky at the other. You can see my video of the dance here.

The city is bursting with little Plazas complete with commemorative sculptures and statues and some beautiful buildings and cathedrals. One notable building is the Placio de la Mondea – Chile’s presidential palace, which is seen beyond one of the largest flags I’ve ever laid eyes on. Underground the square is Centro Cultural Palacio la Moneda, an interesting underground art museum where we visited an exhibition that explored Chile’s history and what it means to be Chilean.

What to do: Apart from what I’ve already mentioned there are loads of other things to do in Santiago. There’s a free city tour (well, for tips) that I think would have been good to do (we did a similar one in Valparaiso which was excellent).

We also went to the Concha y Toro bodega in Maipo Wine Valley, an hour and a half drive from the city. There’s loads of traffic coming back so it actually takes much longer to return. We did the $40,000 pesos tour which includes wine and cheese tasting and a trip down to the Casillero del Diablo cellar, the oldest in the Chile. We booked this with Turistik which are all over the city, you can’t miss them.

Travel: Planes and buses are abundant. We left on a 24-hour bus to Iquique. Note that the bus is considerably more expensive on a Sunday.

Food: Check out my blog on Borago here. Otherwise, there is plenty of good food available ranging in price. There are loads of sushi places in Santiago which is always a bonus. Also, try these amazing milk lollies (see below).

Drinking: We drank mostly in Bellavista where Pisco Sours and beers are abundant.

Accommodation: We actually stayed in three different places – Guest House Mery, slightly further out in Barrio Brazil, Santiago Neighbourhood in the historical centre, and Apart Hotel Latino in Providencia. I’d recommend them all; though the first is quite hard to find. They’re all midrange in price.

Note: There’s some confusion about paying the 19% tax on accommodation. We paid pesos cash and almost everywhere (all over Chile) we didn’t have to pay the tax. However, Santiago Neighbourhood said we had to pay it and Guest House Mery said if we pay card we don’t have to pay it. I was left a bit confused by this but I’d say it’s best to try and pay in cash to avoid the tax.

July, my birthday month, has been amazing! What with the pandemic and two babies in three years, and me disliking lockdowns only marginally more than pregnancy, let’s just say these last few years have felt like a slog. I deserve those martinis (as we all do)😂 But grateful I am to celebrate another year and to know that my reproductive years, and hopefully lockdowns, are now firmly behind me. Liberation at last 🤣🤣 I’ll drink to that. Honestly though, so fun to enjoy my beloved London in all its glory with some of my favourite people (some poctured, many not - Instagram only allows 10 pics, not enough!). In the words of Beyonce: “I told you gimme a minute, and I'll be right back” 😂🥂#London #LoveLondon #outtalockdown #free #summervibes @kurisuomakase @southbankcentre @sam_fender @dukeslondon - to tag a few places.
Can also recommend the new @monkeyleafcafe in Streatham Hill. #comida #foodie @strestham #streathamhill #london
Can confirm the sashimi at @elementssushi is very good and worth a visit. #sushi #streatham @southlondon #sashimi #foodie
It was the perfect morning for a lido swim! Love having this a short walk from my house. #nofilter #lido #Southlondonlife #lido #swimtime
Baby days 👶👶#babylife #selfie #summer
Bought this in Eataly, thought it was a pate and ate it straight out the fridge as such. Realised afterwards it was not a pate, but a sauce 🤦‍♀️ #comida #food