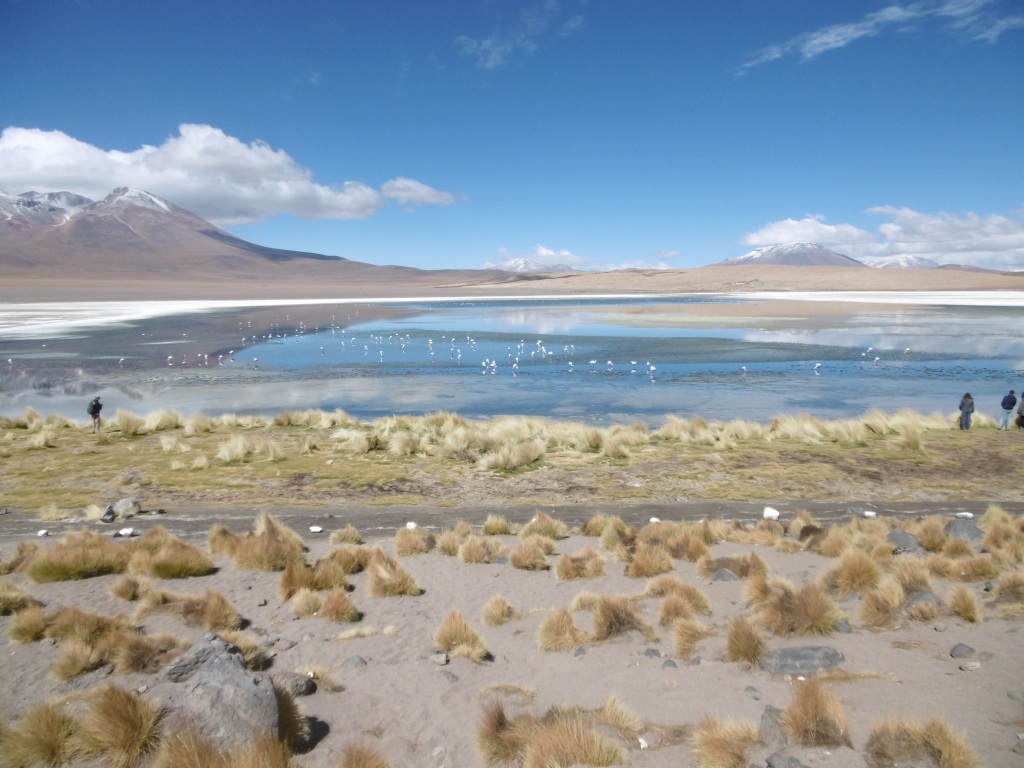 The next day of our Salar de Uyuni trip was spent mostly in the car. On the trip a lot of time is spent sitting in a dusty, bumpy 4×4 climbing altitude. However, you do pass some amazing scenery and stop every hour or so to take pictures and stretch your legs and take a pee ‘au natural’.

It was significantly colder this day. The wind was fierce and relentless, and as I climbed a hill to take some pictures I could really feel the altitude restricting my lungs.

Highlights of this day were eating lunch while watching some viscachas, a rabbit-like animal hang around for scraps; seeing elegant flamingos fish for shrimp against a sky of blue, white and yellow hues, making for some breath-taking photos (how the flamingos stay upright against the intense winds must be another of life’s mysteries); and spotting wild llamas and vicuñas. 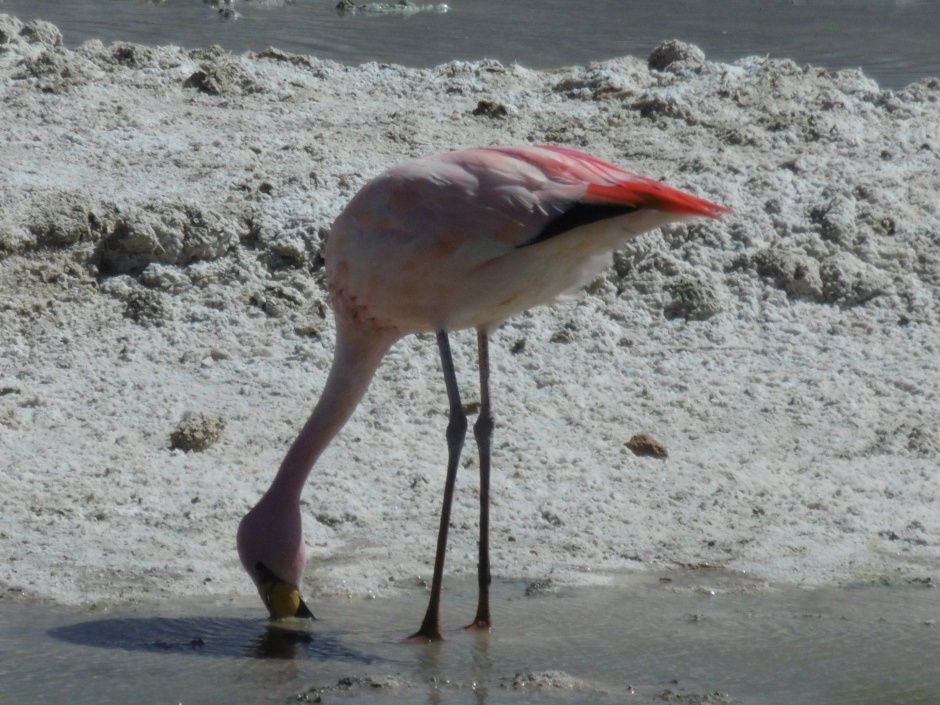 As time passed the day grew colder and colder.

At around 4pm we reached our accommodation for the night, which was at 4,300 metres above sea level. Our group were the only ones staying in the remote hostel, so it was very quiet and cold. Once the sun set for the night we had two hours of electricity before we had to retire to a room with six single beds. There was no heating and we had to be up at 4am the next morning.

When the Canadian girl slapped one of the bed covers dust flew off in every direction. Lovely.

By about 8pm it was absolutely freezing. My husband was struck down by terrible altitude sickness that manifested in a throbbing migraine, so we left the group to go to bed early.  For bed I dressed in thick socks, wool knee high socks, tight training pants, three tops, a hat, a scarf and gloves and a blanket around my back (I have spondylitis and a draft is no good for it). After about an hour of clinging onto the body heat of my husband under the blankets I finally managed to feel toasty but it was a long night. 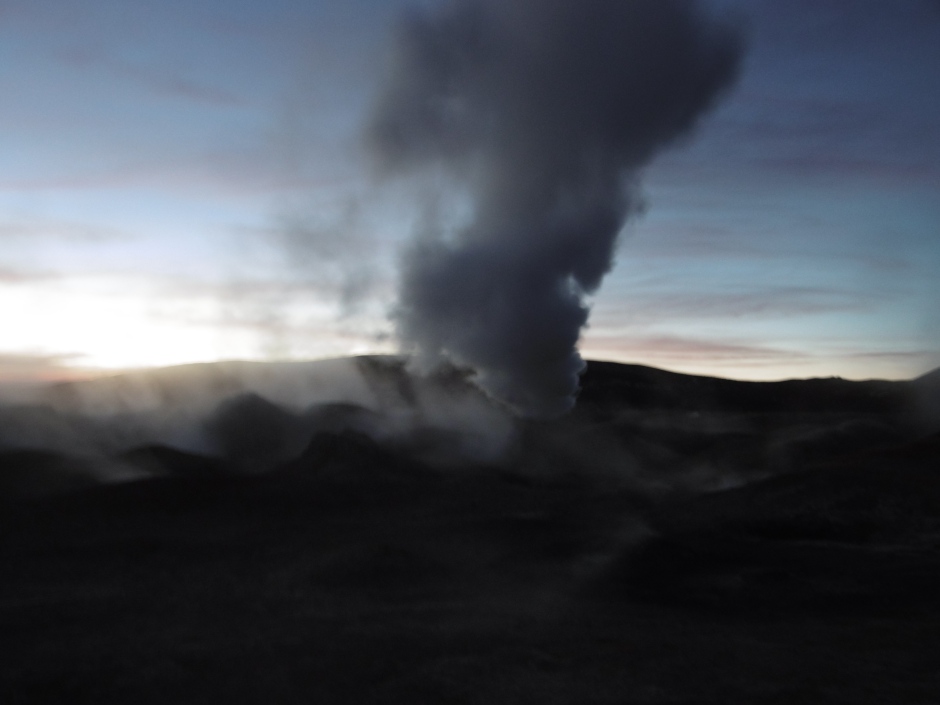 The next day was just as cold. We drove an hour to the Geiser Sol de Manana (Sun of the Morning geysers). We saw geysers in San Pedro de Atacama so I wasn’t that excited to see them, but these geysers were much better. They had a kind of witchy, mystical feel. As we approached you could see the geysers roaring in the distance, their steam easily visible in the early morning cold and darkness. After warning us to be-careful, our guide walked us around the angry geysers, which churned up mud and water.

As the sun began to come up we drove to some natural hot springs and then to the Salvador Dali desert – named so because it apparently looks like one of his paintings.

A quick stop at the green lagoon and it was time to drop some of our group off at the Chilean border before the seven-hour drive to back to Uyuni taking the ‘less scenic route’ which still turned out to be very scenic indeed.

On this last day of the trip we reached altitude of 5,000 meters. Apart from difficulty when exerting myself it didn’t affect me much, but my husband still had a terrible headache, loss of appetite, and slight face swelling. The tour guide didn’t really have a solution, which wasn’t great. We bought some coco leaves at a market on the way back to Uyuni. Coca leaves, the leaves from coca plants from which cocaine is made, is supposed to help altitude sickness. Chewing coca in Bolivia is a national pastime. The leaves provide a boost like caffeine and can make your mouth go numb. After chewing a bunch and drinking litres of water my husband did seem to pick up a bit but his altitude sickness wasn’t completely gone (in fact, it wouldn’t go for another couple of days).

Reaching Uyuni we were greeted by riot police and a civil protest. We asked the women in the tour office “Que passer?” (What is happening?) She said that a month before a young boy had been murdered in the street and the protestors believe the wrong person has been arrested and charged by the police. That day was a pivotal court hearing so the people were out to show their support for the accused. The protesters were very peaceful but they did throw firecrackers often, which seemed to scare the living day lights out of a group of English and Irish we saw when we went for dinner a bit later. The armed police response, with helmets, arm shields and masks, seemed a bit heavy handed, but then Bolivians are known for their no-nonsense protesting.

And that was our Uyuni experience over! Onto Potosi…

Trips for fellow travellers: If you’ve researched the Uyuni salt flats tour you’ll probably know that there is a bit of a problem with the guides drink driving or driving hungover from the day before. I was a bit concerned about this but our guide, Walberto, from Andes Salt Expeditions drove very safely. In fact he drove so safely you could say he was a bit too slow, but better safe than sorry! He didn’t give us much information, but other than that I highly recommend the company. We paid $120 per person, booking in advance via email, but some people on our tour paid about $100 booking the day before. The food, though not always amazing, was abundant.