I’d come to El Chalten expecting cold weather, and although the two previous days had been reasonable weather wise – no rain or strong winds – I wasn’t prepared for the oppressive heat that bore down on us on our third day of trekking.

The scenery was beautiful – yellow-green fields flanked by vast, giant grey and brown mountains – however, the temperature made me feel like I could easily have been trekking through the Australian outback during peak summer.

This did not make me happy.

Unfortunately for my husband I was very grumpy for the first 4k of the walk, which was all uphill and devoid of any shade. The scenery, which was similar to what we had seen the two previous days, did not cheer me up. I threatened to quit a number of times – this wouldn’t be the only time I’d do that on this 9 hour trek –  but my husband, his patience sliding, gently tried to coax me: ‘think of what an achievement it’ll be once you’ve finished – you’ll be the queen of trekking’. I think my response to this was a dirty look. Nevertheless, I had to respect his attempts to encourage me, so I kept trudging on.

I’m reading The Sympathiser by Viet Thanh Nguyen (I highly recommend) at the moment about the end of the Vietnam War and the fall of Saigon. As I marched along the rocky narrow path, legs feeling heavy and the sweat trickling down my back, I couldn’t help but wonder how the American soldiers withstood marching through the oppressive heat and wild terrain they were not used to during the war. I thought about the English soldiers that worked during the blistering hot Afghan summers and wondered how they coped. If I had been sent to such a country  to fight, I have no doubt that after four hours trekking I’d have fashioned a white flag out of my hanky, raised my arms and said ‘I surrender, put me in a black hole for the next three years – anything is better than this’. 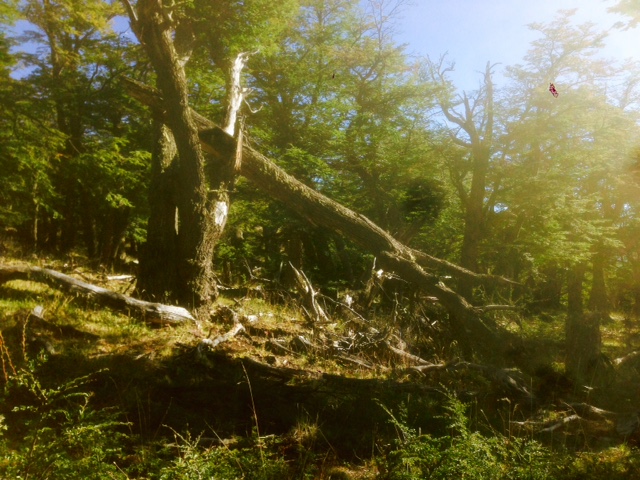 After what seemed like an eternity we mercifully reached a forest where we continued for another couple of kilometres comfortably shielded from the mid-day sun.

Then we reached an open field again with spectacular views of Mount Fitz Roy and the Torre mountains. It all suddenly felt worth it.

‘I think we just have to climb that big hill and we’re there’ I said enthusiastically to my husband.

I should have learned by now that mountains are devious bastards; when you can’t see anything beyond the massive mound of rock before you it’s easy to think that reaching its peak will be the end of your journey. In practise what happens, most of the time is, you get to the top of that peak and you realise it’s just a bloody-great big curve in the mountain and there’s more, far more, to climb.

Once we reached this peak, much to my disappointment, we then had to walk along an uphill stone-riddled path where we could see a massive lake in the far distance on the left and a flat-ish ground on the right side at whose edge Mount Fitzroy and the Torres Mountains could be seen in the distance.

‘That must be our destination’ I wearily said to Neil, pointing to the cliff edge where I could see people enjoying their lunch.

He looked at me with a mixture of pity and fear. ‘No, that’s not our destination. That’s our destination’ he said pointing at a massive mountain off in the distance. (See picture below).

I didn’t believe him at first but after having a good look I could make out tiny specs of people slowly making their way up the steep incline.

‘I’m not doing it’ was my first reaction. We had been walking for three hours, in the heat with blistered, sore feet. However, after some lunch and some gentle encouragement I was willing to climb it for my husband, if nothing else.

The views were spectacular! You can see the picture below or a little video I made of the whole trek here. What was most impressive to me was just how high up we were, it was quite scary at first. Mountains really make you feel physically small and vulnerable at times. As I reached the top it did feel like an achievement. However, mostly I just kept thinking that a year and a half ago I couldn’t even walk up a flight of stairs without getting heart palpitations and had to take medication. Without the excellent work of NHS doctors all of this trekking wouldn’t have even been a possibility – I felt very grateful to them.

It was a long way down – all downhill at least – to reach the beginning again. By the time we got there my feet were so painful I could barely walk and walking on solid ground felt weird.

So that was our three days of trekking over!

Scenery ranking out of three: #2

Difficulty ranking out of three: #1