It is the sounds, rather than the sights, of some places you visit that strike you, that stick with you and forever remind you of that place. For example, when I think of Hanoi in Vietnam I can hear the constant beeping of car horns, the jostling of traffic, and the jingle played by the mobile ice cream vendors who cycle around the city.

Uyuni, a bare bones town nearby the famous Bolivian salt flats, and built in-part to service the flow of tourists who come to visit this natural wonder, was our first encounter with Bolivia and I will always remember it for its distinctive sounds and noises.

The day of our trip to the Bolivian salt flats, I woke up at 4:30am for an interview with London via skype. In that quiet hour, along with my interviewee, I heard the rain pelting down hard outside and a train horn, like something from the 1920s, sound off intermittently in the distance. Cockerels screamed in the distance ringing in the new day.

Our room was small and, quite frankly, left much to be desired. A hole in the shower ceiling exposed loose electrical wires. The switch for the bathroom light was also located in there. Where else? We had two single beds with mattresses like cardboard. We shared one bed for warmth because the gas heater was so ancient I didn’t trust leaving it on overnight. This meant that I had to spend most of the night lying on my right side due to lack of space and so as not to get the dirty curtain in my face. Therefore, by morning my hip was completely numb and after I rose cramp travelled down my thighs.

After my interview I headed back to bed, cursing under my breath the shitty sleeping situation. It wasn’t long before I could then hear a sound that I can only liken to an air raid that rung out just after 8am. It was time to rise to get ready for our trip.

As is customary now, I went down for breakfast alone while my husband spent some quality time in the bathroom.

At 10:30am we carried our bags, which now totalled four – two big, two small – downstairs, coating half our jackets with dark yellow paint that was currently being applied haphazardly to the hostel walls.

It was good to leave Uyuni behind. There’s not much to do there except eat bad food and drink cheap beer, stock up on warm clothes made from alpaca and llama wool and wander round the market on a Sunday. Here they sell clothes, CDs and all kinds of knickknacks that belong to an era long left behind in the UK (and other Western countries).

Little old ladies, known as Cholitas, short and stout and with missing teeth and hair done in Pocahontas style plats, wonder about in their thick tights, wide rimmed, shin-length skirts, bowler hats, and little heels, selling empanadas, jelly and cream (delicious) and all other kinds of stuff. (I would later learn their attire, which is worn by many indigenous women of all ages all throughout Bolivia, is inspired by the clothing worn by their upper class Spanish colonisers who they tried to emulate. Only the hats vary in shape, representing different communities.) People munch from street stalls and dogs, dirty and unloved, roam the streets.

Around the bus terminal – well, less a terminal and more a small street lined with dust-laden buses and agencies selling bus tickets – women call out constantly ‘a potosi a salle’ (straight to Potosi, the next major town) relentlessly before a bus is due to leave. When there are no busses leaving they call out something indecipherable, but each in the exact same tone and for the exact same length of time.

Setting off for the salt flats

The hubby and I, an American couple, a Mexican/ Canadian girl, an American girl of Indian descent and our local drive – seven of us in total – packed into a dusty 4×4, with luggage stacked on top, ready for our three day, two-night adventure.

Before boarding, the Husband and I had a little disagreement about which bags should go on the roof and which in the cramped car itself. Spotting our burgeoning feud, the owner of the tour company, a short middle-aged indigenous man, quickly sidled up to me. Putting his arm around me and rubbing my shoulder, he said ‘tranquila, tranquila es ok’ as he stealthily ushered me into the car, obviously trying to abort what he considered a potential domestic. Perhaps he thought that wasn’t the best way to start a trip that involved sitting, thigh by thigh, for around seven hours a day in a bumpy jeep.

‘See, he feels sorry for me’ my husband said with a cheeky smile as he got into the car.

Sights of the salt flats

The first stop on our tour was the so-called train cemetery where trains used in the colonial era to transport minerals were left to rot. Not terribly fascinating, I thought, but people seemed to enjoy climbing in and out of their rotten shells like big kids. Two Latin American looking-lads had a full-on play fight atop of one train.

Then it was on to a small village selling mostly tourist stuff – toy llamas, jumpers and all sorts of cute little things.  Here I went to the toilet three times. Altitude makes you pee non-stop. I think this is because your body processes things much quicker at altitude. (I read on Wikipedia that people who live at altitude have a higher life expectancy but are more likely to commit suicide.)

Before we arrived at the salt flats we had to pass some kind of make-shift control point (they’re always make-shift – later on in Bolivia we would pass many made of string). As we pulled up, and the guard approached, our driver, Walberto – a short stout man with a serious face who said very little throughout our trip – turned to us and said ‘do you have any cocaine?’ without a hint of irony, sarcasm or humour. The whole car sat in silence not sure how to respond, until finally the American girl in the front started laughing uncomfortably and said ‘I think he’s joking’.

After a short drive we made it to the famous Bolivian salt flats.

We finally reached the salt flats which were covered by shallow water and therefore great for taking reflection photos (as you can see below). 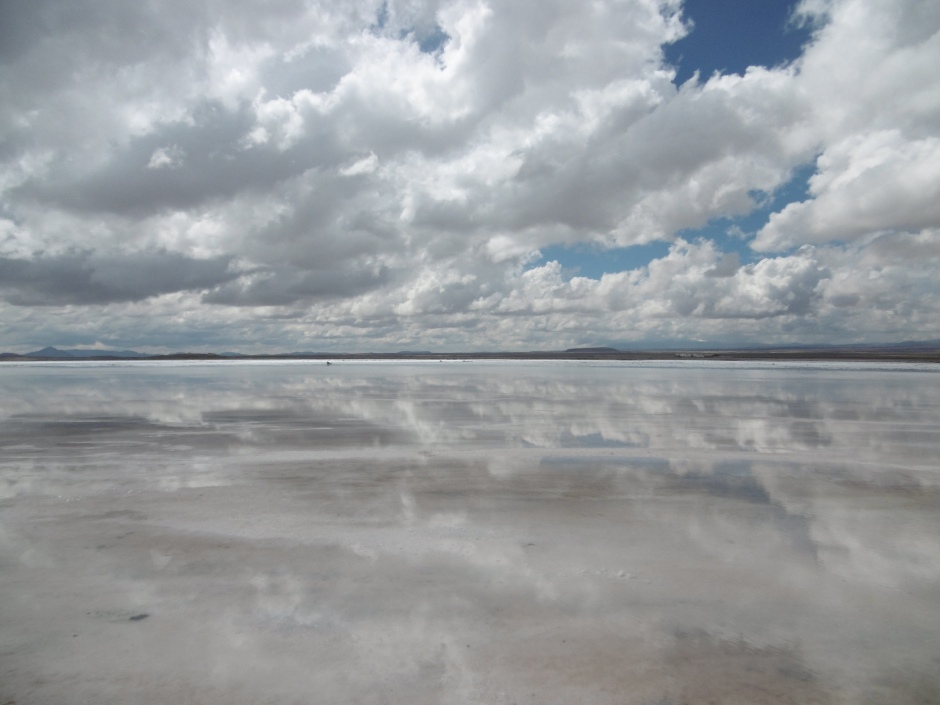 Besides the brilliant whiteness of the flats, what’s so impressive is their sheer size. We drove for hours and all you could see was brilliant white and blue sky. How the driver navigated where he was going I have no idea.

When we reached the dry salt flats it was time for silly photos (see below). I’d like to point out these were not our idea but as directed by Walberto, our driver 🙂

Then it was lunch of the driest llama I’ve ever had the misfortune to eat, quinoa and vegetables in a hotel made of salt.

Next we breathlessly climbed an island full of phallic looking cactuses. At this point on the trip we were gaining height rapidly so exertion was challenging. 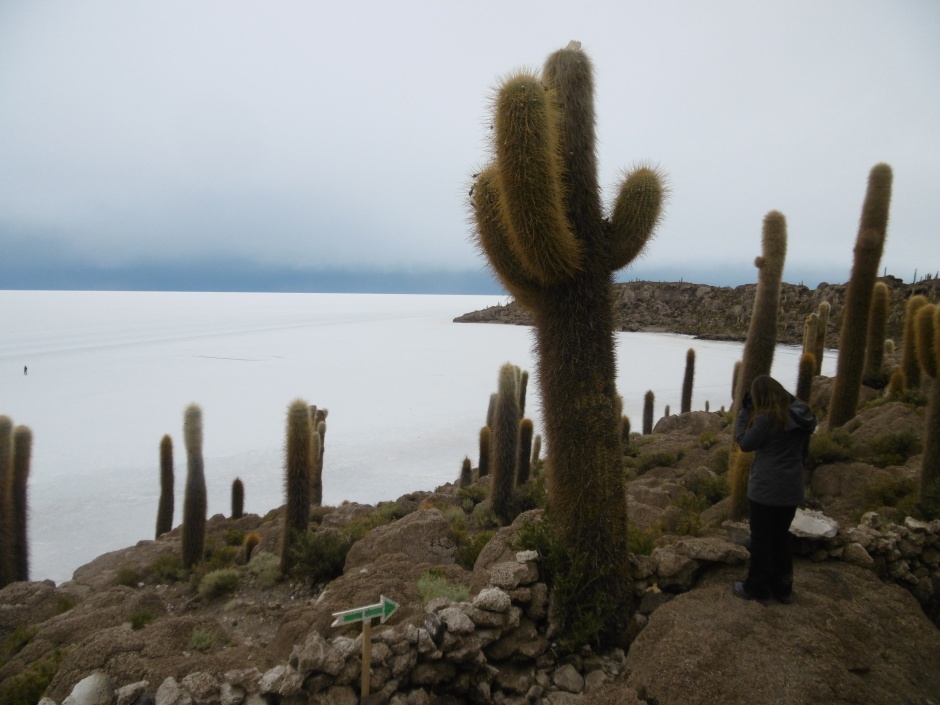 On our way to our first night of accommodation we stopped to watch the sunset over the salt flats which was very impressive. However, defeated by wind and rain we watched warmly from the car until a rainbow appeared and lured us back out to the salt.

The first night’s accommodation wasn’t all that bad considering what I’d read on Trip Advisor reviews. It was a hotel ‘made of salt’ or, more accurately, decorated in salt – the walls were plastered in salt, but you could clearly see there was concrete beneath, and the floor was scattered with thick salt.

Over dinner of chicken, chips and salad with our new compadres we had an in-depth conversation about the American healthcare system which left me feeling so grateful to be born in a country where healthcare is not only excellent most of the time, but completely free. In turn, the American guy seems amused we would put a tax on sugar.

After everyone went to bed the hubby and I did enjoy, however, some sweet American bourbon – ‘”We’ll just have one…oh there’s not much left in the bottle, we might as well finish it” – before I passed out for a lovely, warm sleep.

Stay tuned for a blog on day two coming shortly!