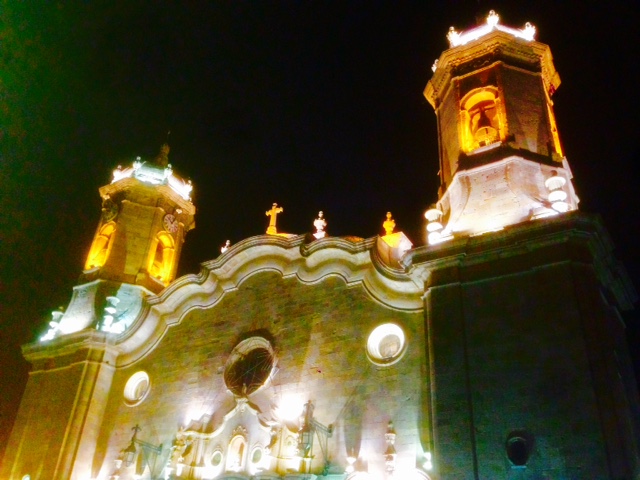 Potosi is 4,090  metres above sea level – just over 300 metres higher than Uyuni, where we arrived to from . As we reached  Potosi in the middle of the night by bus my husband was still ill from altitude sickness.

That night there was nothing to do but shower off the dirt from the salt flats tour and go to bed.

The next day my husband still had a terrible headache. However, we optimistically booked a mine tour for the next morning hoping he would have acclimatised by then.

Potosi was founded in 1545 as a mining town due to the masses of silver mining undertaken during the Spanish colonial era. In fact, the silver mines of Bolivia were pillaged during this time.

Today, for tourists, Potosi is most famous for the unnerving underground mine tours of the silver mining cooperatives that mine the little bit of minerals leftover. They’re renowned for very poor conditions and the work is very labour intensive. The mines are dangerous places; the most common form of death for miners is due to cave-ins and their life expectancy is considerably shorter than the average Bolivian.

I was slightly terrified of doing the tour. It involves hot, cramped, sweaty, gassy conditions and i’m slightly claustrophobic.Plus, I write about mining so I think I’m slightly more aware of what can go wrong and the reality of that than the average person.

However, I really wanted to do it as you get to interact with the miners (you buy presents for the miners from the miner’s market) and although there is obviously a voyeuristic aspect to the tour, I think it benefits them as about 5% of the tour prices supposedly goes to the miners. Obviously this percentage should be much higher.

It wasn’t meant to be, though. My husband was still feeling ropey and I also got ill too, so we missed the mine tour because neither of us felt up to it.

So, in the end, we only really had an afternoon to explore Potosi. 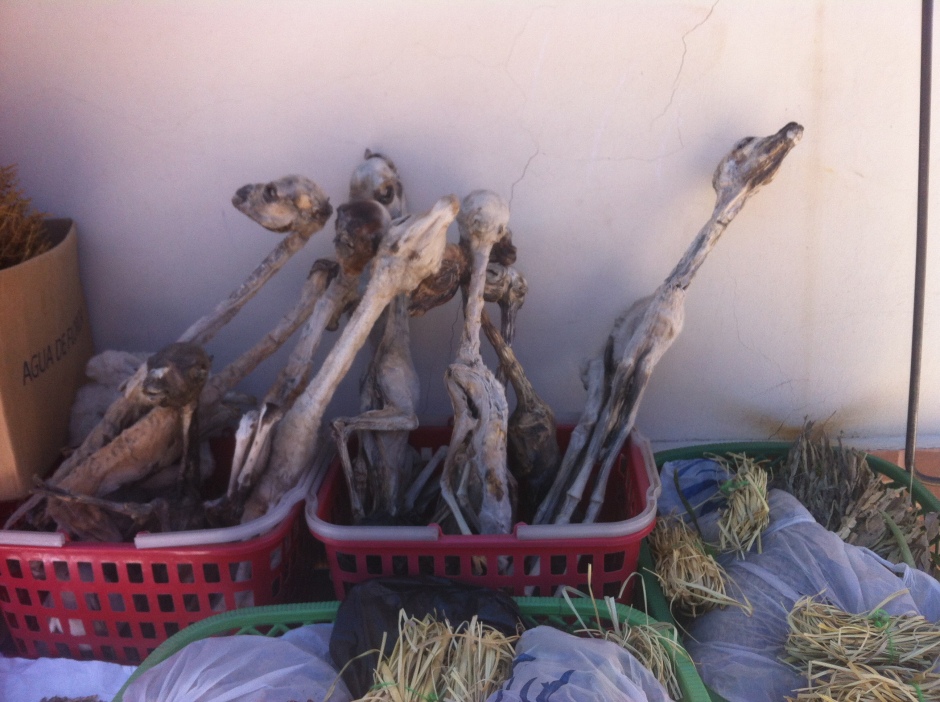 Instead, after resting, we just walked the hilly town taking in the colonial architecture, relaxing in the square and soaking up the culture, which is like nothing else we’ve encountered before. We gawped at the llama foetuses and other kinds of witchy offerings in the market (see below). I’ve read that some Bolivians believe you’re supposed to put the foetuses under your new house to ward off evil spirits.

We walked past shops selling solely an abundance of three types of eggs – big, medium and small – and toilet paper. I hope the two weren’t connected in any other way. Another sold only different varieties of cereal. And other orange chickens stacked one on top of the other (I have no idea why chickens are orange in Bolivia). Diversity of product didn’t seem to be an issue in Potosi.

There also happened to be a carnival going on. Walking around in the early afternoon we saw girls, boys, men and women, preparing for carnival by eating heartily from street stalls already in their carnival gear. 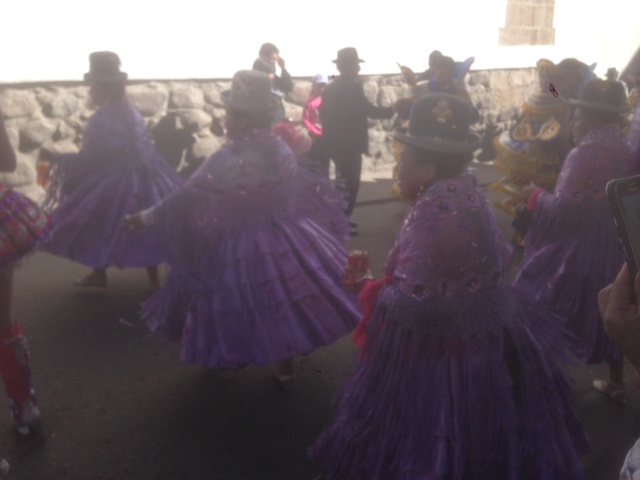 I tried an empanada from an old lady who kindly let me take her picture (see below). I discovered I’m not keen on Bolivian empanadas as they are more sweet than savoury. 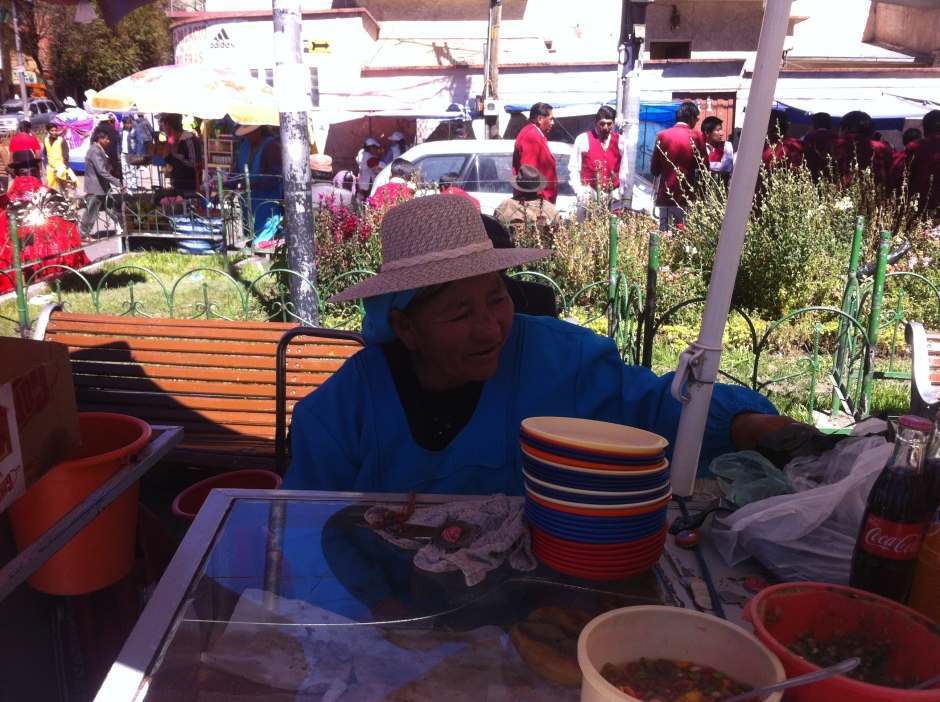 People not in the procession came up to the dancers and musicians and gave them wine and beer, chewing gum and all sorts. One guy looked so wasted, or tired, I’m not sure, he could barely stand up let alone dance. This was on a Saturday afternoon, but from our hotel room we’d heard the same procession go through the streets until the early hours of morning the night before.

When I asked at reception what the carnival dancers were celebrating, the middle-aged female receptionist shrugged her shoulders and said ‘I don’t know, they do this at the end of every week – they’re not celebrating anything!’ What a way to see in the end of the week!

The same night they also had a concert in the main square. I loved the community feel of Potosi but I would later learn that street gatherings and public concerts at the weekend is routine in Bolivia.

Compared to Uyuni, Potosi offers much more of a cultural experience. It doesn’t survive mostly on tourism like Uyuni, it’s just Bolivians going about their daily business. I really enjoyed my brief time in city with its beautiful colonial buildings and party-ready people.

To leave Potosi for Sucre (three hours away) we got a private taxi for £20 (around 200 Bolivianos). It would have been cheaper had we went with two extra passengers but the driver was taking a while to find some others to ride with us (I think the locals prefers to travel with other locals) at the taxi rank so we just decided to pay the extra.

As I’d expected, it was a grit-your-teeth-and-hope-for-the-best kind of journey as the guy used his accelerator to the max, without a working speedometer, around the mountain road overtaking anything and everything. This actually included not only cars, but donkeys and pigs. Every time I saw him itching to overtake at a blind corner I prayed he’d wait and not do so. There were no working seat belts, either.

Accommodation: We stayed at Hostal Turkus. Big spacious rooms, TV and heating for £20 (around 200 Bolivianos) a night and the place has a decent (for Bolivia) restaurant.

Eating: Besides street food there’s a pizza place on Santa Cruz Street that has really decent pizzas for £6 for the biggest size, which is massive. It gets really busy though so be prepared to wait a bit.

We found on Saturday night nearly all the restaurants besides the pizza place and a few others were closed. I have no idea why.

Things to do: Nearby there are hot springs called Tarapaya Hot Springs. You can get the bus there.  Beware of taxis offering to take you for the same price as the bus, we heard stories that these taxis were likely to rob you.

We booked the mine tour we didn’t do with Green Go because they seem the most responsible and don’t use dynamite just for show. We spoke to the owner Julio and he speaks perfect English and seemed very knowledgeable, if a little full of himself! He also seemed to have a good backup plan if we got Ill in the mine because we said we were feeling unwell.

Only in France would they hold a fete for the humble cone! #France #Holidays #food #foodie
Beach life 🥰☀️🌞🌅🚉🕶 #Malta #Holidays #beachtime
Just finished this book and really enjoyed it. Took me a few chapters to get into it (partly the baby arriving meaning it was stop/ start at first and partly as I don’t usually like books based in London all that much as I like to read about other places, though it’s not all based in London) but Evaristo writes compassionately from the perspective of a host of different women, though mostly all black British, from various backgrounds and experiences in a beautifully succinct and witty way (I appreciate this massively as Hemingway is my favourite writer) to create a sort of tapestry of women in Britain today exploring the themes of gender/ race/ sexuality/ identity etc. anyway it’s good, give it a go! #book #reading #girlwomanother #readingrecommendation
I think this one looks like me, what do you think? #baby2 ❤️#colour
Made a cake with Jack and I feel the cake represents my personality somewhat: extremely messy, highly decadent, lots of fun, but also a bit too much 😂😂 #cake #cakemaking
July, my birthday month, has been amazing! What with the pandemic and two babies in three years, and me disliking lockdowns only marginally more than pregnancy, let’s just say these last few years have felt like a slog. I deserve those martinis (as we all do)😂 But grateful I am to celebrate another year and to know that my reproductive years, and hopefully lockdowns, are now firmly behind me. Liberation at last 🤣🤣 I’ll drink to that. Honestly though, so fun to enjoy my beloved London in all its glory with some of my favourite people (some poctured, many not - Instagram only allows 10 pics, not enough!). In the words of Beyonce: “I told you gimme a minute, and I'll be right back” 😂🥂#London #LoveLondon #outtalockdown #free #summervibes @kurisuomakase @southbankcentre @sam_fender @dukeslondon - to tag a few places.