On Friday, I waited outside the Southbank Centre, for a full forty-five minutes in the fresh morning air, to buy tickets on the door for the annual Women of the World Festival.

The festival aims to celebrate ‘the power and potential of girls and women and confronts the causes of inequality’. It was very much worth the long wait.

I have not had the pleasure of going in previous years, so I don’t know if this is standard, but all the sessions I attended discussed issues that were not only relevant to women, but to anyone with a pulse and a brain, and especially those interested in living in a modern, progressive society.

Agnes wants to go to space

Five minutes into the opening remarks, I knew I’d spend much of the rest of the day staring intently forwards, a lump in my throat, trying not to move my face in case the tears should spill from my eyes. I cry a lot, so this wasn’t a big surprise. People tell me that after having children you cry much more. Honestly, I don’t think that’s possible for me.

The first story of the day to set me off was that of a young statuesque black girl, who the curator, Jude Kelly, had met only days before but had asked to speak on the opening panel. She wore skinny jeans, long thick braids and a NASA t-shirt. I was extremely impressed by the ease with which she took to public speaking.

Agnes wants to be an astronaut, hence the NASA t-shirt. After studying hard at school, she went to college and achieved all A grades in her A Levels, including maths and science.

Her academic life seems destined to be cut short, however, because Agnes is unable to afford to go to university, as despite being in the UK for most of her life, she is classified as an overseas student, for whom the university fees are extortionate.

Agnes said she is now working to save money to pay to go to university and is involved in a campaign to get universities to make exceptions for students like herself. Some have already agreed to do this but Manchester University, where Agnes was offered a place, have not.

Her story reminded me of the difficulties those who were not born in the UK but have made a life here often face, especially in today’s political climate. In particular, I am thinking of the three million EU migrants who no longer know whether they’ll be granted indefinite leave to remain in the UK.

The other day my father told me about a woman who was recently deported from the UK, forced to leave her husband and kids, after having lived here for 17-odd years. Could that happen to me? He asked worriedly. You just don’t know, Heidi, he said. My father is from Malta and has lived here for over 30 years but he never applied for a British passport, much to my mum’s annoyance. For years, she had to wait for him in the long ‘non-EU’ queue at the airport. He didn’t want to change his passport because he’s proud of where he comes from.

I don’t think my father’s going to be deported anytime soon, but it was sad to hear him worry about it after giving go so much to his adopted country over the last 30 years. I’m sure Agnes will also make it to university. Hopefully, the platform given to her at WoW will help in some way, if not her determination will.

First, you must buy the circus

When she was a little girl, Melanie Eusebe wanted to be in the circus, so she asked her mother if she could learn to juggle. Her mother told her, in no uncertain terms, that she could only be in the circus if she owned it first. Once you have enough money to buy the circus, then you can perform whatever you want in it, she told the presumably miffed Melanie.

Her mother has a, rather harsh, point.

Often, women can work and work, in the home for their husband and their children, and still not have economic independence to buy what they need or to feel they have control over their lives. How many women have become stuck in abusive or unhappy relationships because they lack the financial means to leave? Too many. Whether we like it or not, money equals power, opportunity and control.

Personally, not being economically independent frightens me to my very core, it drives me every day. I don’t think I could be in a happy relationship where money isn’t shared and accessed equally. It’s important to me to know that I can support myself and that if I need something I can buy it and I would always want to contribute financially in a relationship when possible. 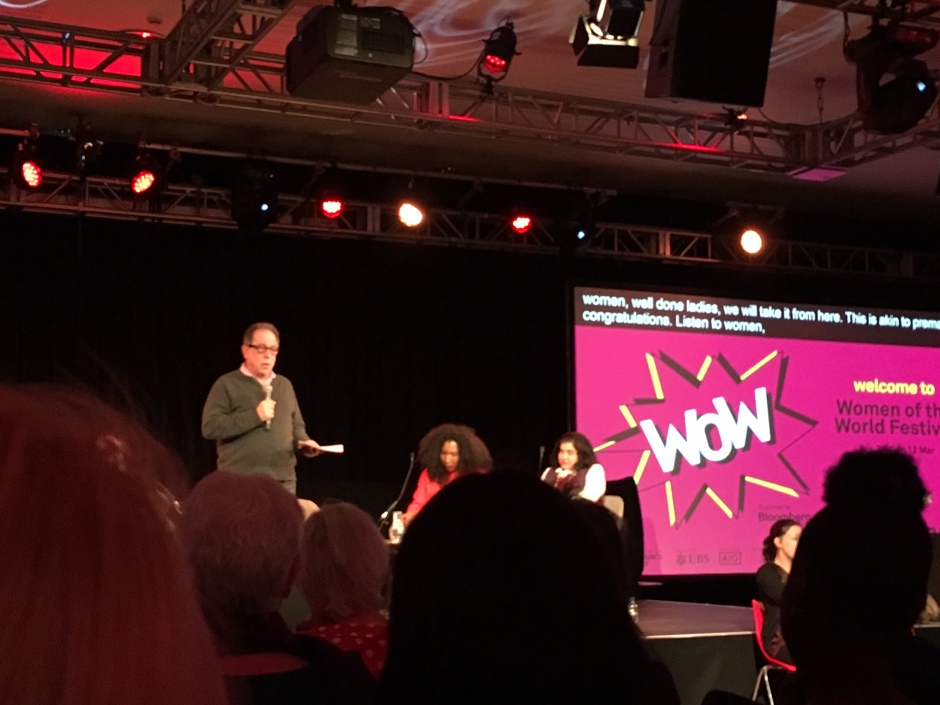 Professor Michael Kimmel, a prominent male feminist and author of Angry White Men: American Masculinity at the End of an Era, addressed the audience like a man who has been saying the same thing for a long time and is flabbergasted that he still needs to keep repeating himself.

“How is it that men as a group have so much power yet feel so powerless?” he asked “I think gender equality would allow men to live the life they really want,” he added.

Kimmel talked about how men are brought up feeling entitled and that everything in the world is theirs for the taking. When this promise fails to materialise because in reality the world now and forever has worked mostly for the minority and not the majority, some men can often try to take power back, sometimes through domestic violence. I’d add that some men may also become depressed or suicidal or drink excessively because they somehow feel like a failure if they don’t have lots of women, money and success, or at least one of these three.

While I am annoyed at the lack of expectation and investment and support for women, I’m often saddened by the amount of pressure put on men.

A central theme at WoW was establishing how society can take the pressure off both men and women by working together to shed stifling traditional expectations and roles.

The last speaker, Muzna, a Syrian woman who came to the UK on a scholarship before the Syrian war, had some choice words for us women about standing up and being counted.

As the other speakers addressed the audience, Muzna Al-Naib, a Syrian documentary film maker, spent much of her time sitting on the stage half-listening and looking like she was on the verge of rolling her eyes at as all. She had a ‘seen-and-heard-it-all-before’ look on her face.

When it was her turn, she stood up and walked to the front of the stage like a ball of energy.  Muzna quickly declared, in no uncertain terms, that she doesn’t like days or weeks where we celebrate women or talk about women’s issues: “We should be doing this every day because they’re human issues!” she berated us.

Muzna told us an impassioned story about a protest in her home city of Damascus. She set the scene: martyr had just been killed and in a local city square, a mother and father of the martyr were on the left, trying to make their way to the protesters, situated on the right. Between them, in the middle, were armed police trying to stop the parents of the martyr meeting with the crowd.

Muzna found herself in the middle with a group of women – mothers, sisters, daughters –  shouting and walking towards the police. As they advanced, the police shot at them to scare them away. The women ran to the sides but then ran back again. This happened again and again. The women held their ground, getting angrier until eventually, they united the parents of the martyr with the protesters. A triumph!

“We say that men are war makers and women are peace makers – this is not true – we are not powerless,” she spat, “Women in Syria engaged in the revolution straight away.”

She spoke of the Syrian women in the White Helmets, a Syrian Civil Defence group saving people from the rubble left by the endless bombs. Little is written about the women but there are around 56 of them working alongside men to save lives. When the revolution started, women frantically protected their younger children, as their eldest sons were out in the square protesting against Assad, she said.

“Money, power and politics are not just for men. One of the reasons we are in this situation [I think she was talking about inequality and not the war in Syria] is because women always left politics to men!”

I have to agree.

For me, one of the most interesting things Muzna addressed was Muslims and liberals. She said the left and Liberals should stop perpetuating the myth that Muslim women are oppressed because by doing so, they are aligning themselves with the likes of Assad and Isis. Harsh words.

Do Liberals do this? I’m not sure. I suppose I have avoided the conversation if I’m honest, but always stuck up for Muslim communities. I do acknowledge some people have called into question whether you can be a feminist and support Islam. I must confess a lot of ignorance here. Bar having a few Muslim friends in school and exchanging polite conversation with the Muslim coffee shop owner down the road (who did tell me I looked very beautiful on Christmas morning after I just put my face on, so I’m a big fan), I don’t know a lot of Muslims, men or women.

I also haven’t read much into Islam or its treatment of women. My current understanding is that there are different readings of the Koran and different practises, much like any religion, so different families and groups do different things. I do see many educated and valued Muslim women who do not look oppressed. Muzna certainly didn’t.

There also some blatant double standards expressed by some non-Muslims, such as ‘oh why are women segregated from men at prayer, that’s outrageous’.  Yet in Western culture, we regularly have ‘segregated’ nights out. ‘Oh they’re going away for the weekend/night, it’s a lad’s thing, women aren’t invited’. No one is as equally outraged.

Muzna’s talk has inspired me to learn more about Islam and in particular Muslim women.

Love this take on the unicorn cake, so sophisticated but fun! By @whisks.and.sprinkles Tasted amazing too. Happy birthday to my lovely niece 💕💕🎉💕💕 #cake #birthdaycake #unicorncake #littlegirlbirthdayparties #celebration
Today I’m in @TheTimes writing about replacing GDP as a measure of economic growth to tackle climate change. It’s a very interesting idea that has been floated for sometime but never gained traction. I spoke to some interesting people and innovative companies about the notion, including the former CEO of Unilever. #journalism #climatechange #measurewhatwetreasure #consumerism #growth #gdp
Quite impressed I managed to make pizza with two under 5s and it wasn’t a total disaster. The dough was from @pipersfarm and made delicious pizza, I was really impressed. #pizza #pizzatime #kids #food
I love @pipersfarm This duck from them was sooo delicious and a lovely birthday treat for @starr824 we ate it all week and I made a delicious duck stir fry! I’ve store the fat for other dishes and made stock with the giblets and bones! #lovefood #comida #duck #London
Happy Birthday to my lovely Mr @starr824 🎉🎉🎉🥂🥂🥂🥂🎉🎉🎉🎉🥰🥰🥰🥰🥰 #Happybirthday #Birthdayboy
We didn’t teach him to smile like this, promise. 🤣#Londonzoo @london_zoo #daytrip #boy