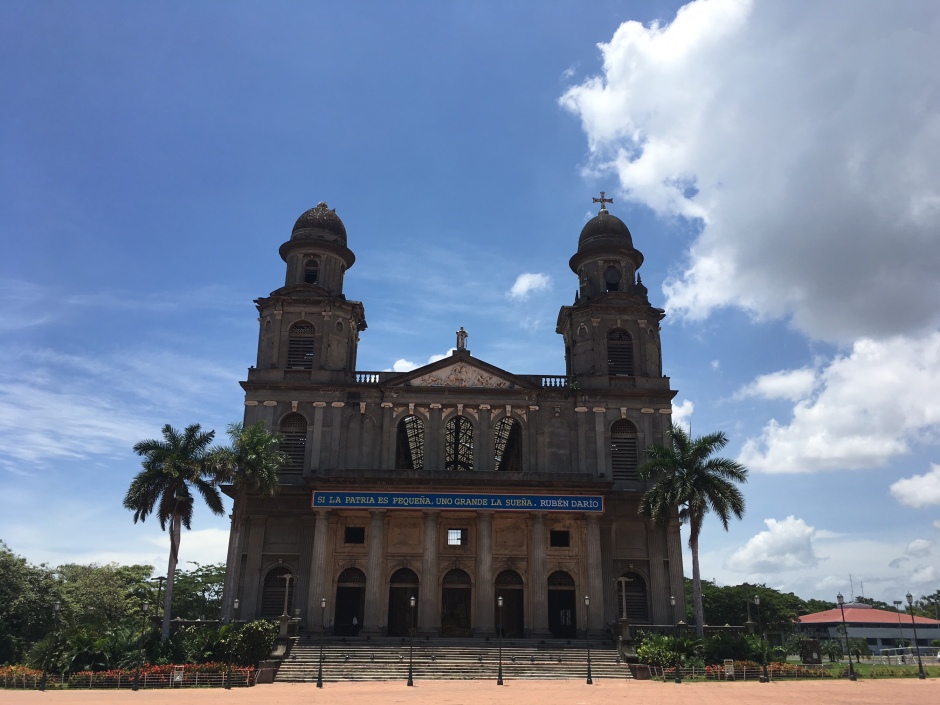 As soon as I saw Catedral de Santiago (aka Old Cathedral of Managua) as I stepped onto the enormous Plaza de la Revolucion I felt a little shiver of excitement.

Simultaneously magnificent, grandiose, crumbling and decrepit, and flanked prestigiously by two obligatory towering palm trees, La Catedral is a relic of history that basks in the Managuan sun perfectly untouched or restored.

People say don’t bother with Managua, that there’s nothing there. But I disagree. It is worth a day, even two,  or at the very least a couple of hours. But then I adore big cities, especially capital cities, because you can usually always find signs of a country’s history in its capital city.

Later in our trip we (I travelled, as I usually do, with my husband) would see a photograph of La Cathedral shoddily stuck to a wall in the crumbling Museum de la Revolucion (there’s a theme here) in Leon. In the old photograph, Plaza de la Revolucion – the epicentre of numerous protests and parades – was flooded with Nicaraguans celebrating the triumph of the Sandinista Revolution in 1979.  Now La Catedral sits empty, hollowed out decades ago by an earthquake 1972, and duly replaced by the Metropolitan Cathedral of the Immaculate Conception. Now it is guarded by two solitary security officers, the only signs of life within its cracked walls.

Old, unrestored colonial buildings like this are one of the reasons I am constantly drawn to South and Central America. And Nicaragua has plenty.

To the left of the cathedral is the Museo Nacional, formerly Palacio de la Cultura y Bibilteca Nacional, another beautiful, but more intact, stately building. It houses pre-Colombian artefacts, describes the formation of volcanoes – Nicaragua has 19 active volcanoes – and briefly covers the Spanish colonial period and the Sandista revolution.

Upon entering the museum we were approached by a middle-aged woman who works there as an art historian. She explained, in broken English, that she is learning English at night school and for her homework she must film an interview with an English speaking tourist, would we oblige? Of course!

No one was available at that moment to film the encounter so she offered to take us around the museum until her friend returned with a camera phone.

She attempted to give us brief explanations of each room. ‘Ceramics from the pre-Colombian period’ was her insight into an entire room filled with terracotta artefacts. Personally, I usually find, this is as detailed an explanation about ceramics as I ever need, antique or not.

Her English was about as good as my Spanish, maybe ‘un poco mejor’ (a little better). As she spoke in English I (tried) to reply in Spanish. I corrected her English, she my Spanish. Having been trying to learn Spanish for around two years, I strongly identified with this woman, I knew she understood the true struggle and frustration of learning another language when you are simply shit at learning new languages. I find some people (annoyingly) pick up new languages as quickly as I pick up bad habits, and others – like me – struggle along at a snails’ pace only aided by blind (misguided?) determination. (Not a very scientific explanation, I know, but I think you’ll find it’s very true).

Our guide’s friend eventually arrived and it turned out this woman spoke English perfectly (I saw our guide look at her in awe – I know that feeling). We completed the interview – twice, in fact, because the friend could master English but was utterly stumped by a smart phone – and went on our way.

Our first meeting with Nicaraguans left me feeling happy and it only got better from there. All throughout our trip locals were patient with my poor Spanish and actively helpful in correcting and teaching me new phrases and words. (I generally find native Spanish speakers are either touched by my attempt to speak their language or impatient if they don’t immediately understand me.)

We were only on the streets of Managua for about two hours and we had conversations with about six people, so friendly are the Nicaraguans. Most told us to be careful with our belongings and that Managua is safe but, ‘por favour, be careful – get taxis at night!’. Whereas Nicaraguans outside of Managua generally had the opinion that in the city tourists would almost certainly get robbed, and possibly worse.

The only other sight of Managua we got to see was the Malecon (pier) which was deserted. Here housed more of the giant colourful trees that we had seen when driving away from the airport. I wish we had time to see more.

A Taxi from the airport cost $25. I felt like this was quite expensive as the airport is not that far from the centre (we got to our hotel in about 20 minutes despite the airport taxi vendor claiming it would take 40 minutes). I asked the hotel reception and they said this was a standard fare.

We stayed at Barcelo Managua. It’s an excellent place to recuperate from a long flight: lovely pool and brilliant breakfast (made to order omelettes) and helpful staff. Unless you have a car, you’ll need to take taxis everywhere. Our taxi driver who took us to the plaza offered to take us around for 2.5 hours for $50 (probably less if we negotiated) and I wish we had taken him up on his offer.

Our first night in Managua was our 3rd wedding anniversary and to celebrate this we had dinner at La Terraza Peruana where we had a decent enough steak meal for a reasonable price. The lady from the museo recommended going to the Bolonia area where there are more bars and restaurants.