The colonial city of Sucre couldn’t be more different from the boom and bust silver mining town Potosi, where we had travelled to Sucre from.

When eying the abundance of sun soaked white painted houses, with terracotta roofs and beautiful courtyards at their centre, you’d be mistaken for thinking you were in Spain and not thousands of miles away in the significantly poorer Bolivia.

Richer and bigger than Potosi, Sucre is actually Bolivia’s capital city and not the more commonly known La Paz, where Bolivia’s Parliament is situated. Sucre is where independence was claimed in August 1825 by Venezuelan Simon Bolivar.

As well as an abundance of Spanish colonial buildings, Sucre’s heart is a pretty tree-lined central square, Plaza 25 de Mayo. You’ll also find a little park with a mini-Eiffel Tower, plenty of stunning churches and endless narrow streets easy to explore by foot. 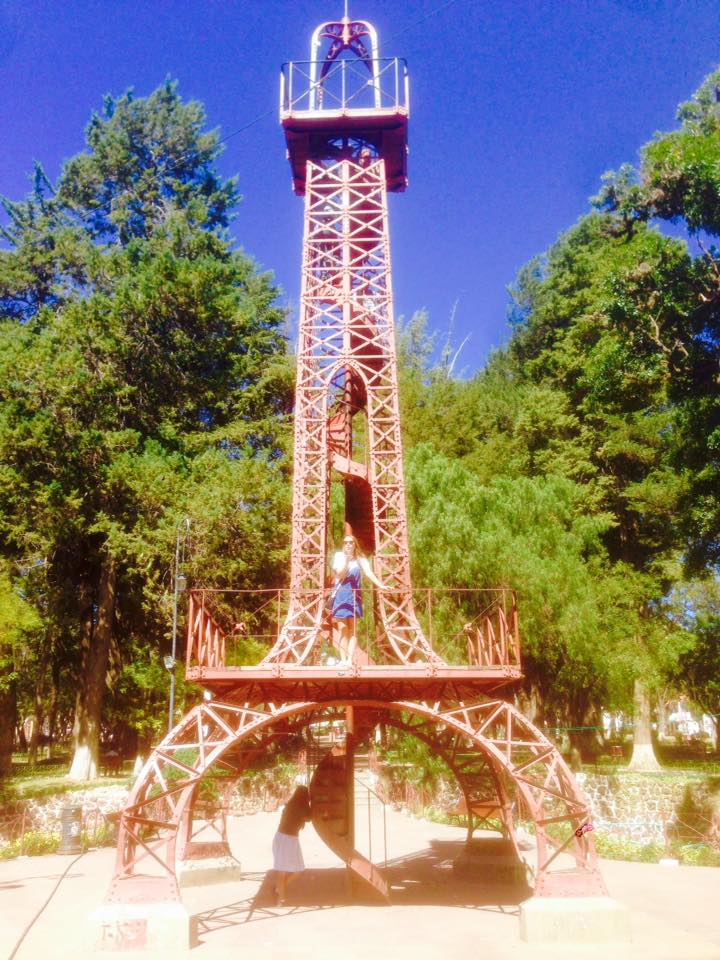 Many, though not all, of the locals are visibly whiter in complexion than people in Potosi.

It’s interesting that when we arrived by taxi from Potosi (a hair-raising three-hour journey of questionable Bolivian driving) our taxi driver couldn’t find our guest house so he asked several people on the street for assistance. These paler skinned people eyed our driver, who was darker-skinned, with visible disdain. Two of them ignored him completely. I can only imagine this had something to do with his darker skin and slightly shabby appearance.

After the bitter coldness of Salar de Uyuni, and the only slighter warmer Potosi, it was nice to feel the warm sun of Sucre on my bare skin.

Our guest house, La Selenita, was beautiful, too. Situated on a very steep hill, we had a cabana in a pretty garden that over looked the town. The owner is a Belgium lady – there are lots of Europeans living in Sucre – who lives at La Selenita with her daughter. Her husband had sadly passed away only the year before. 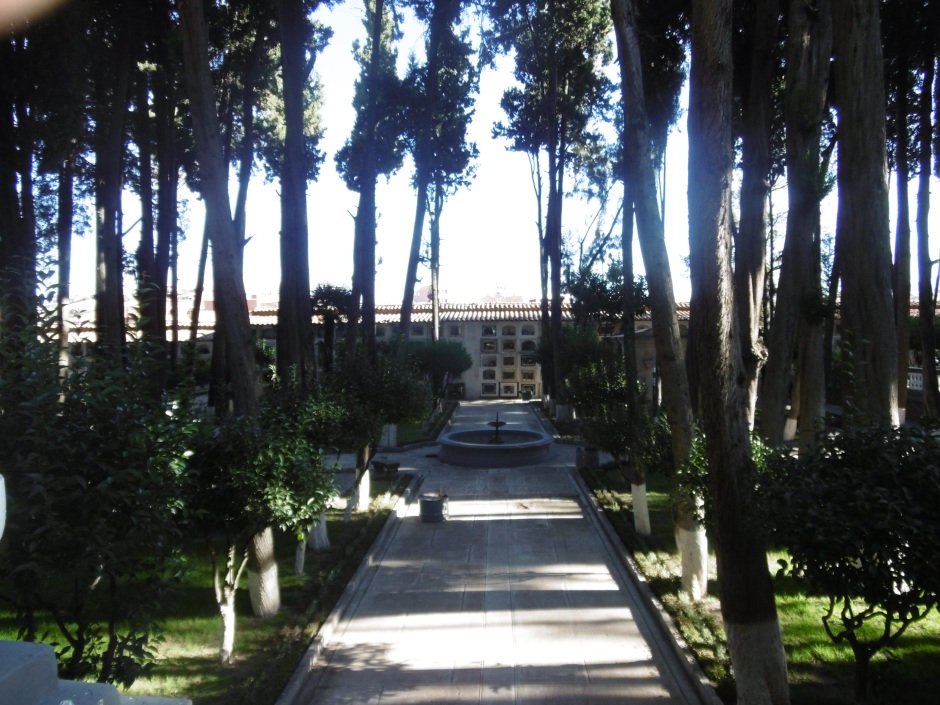 We arrived on a Sunday and everything was closed. Our host suggested we visit the local cemetery as it was one of the only places open.

I find it a bit odd visiting cemeteries. My family are not religious therefore we don’t bury our dead. I’m not accustomed to such places. However, it’s something that’s recommended to do here and in other places in Latin America. 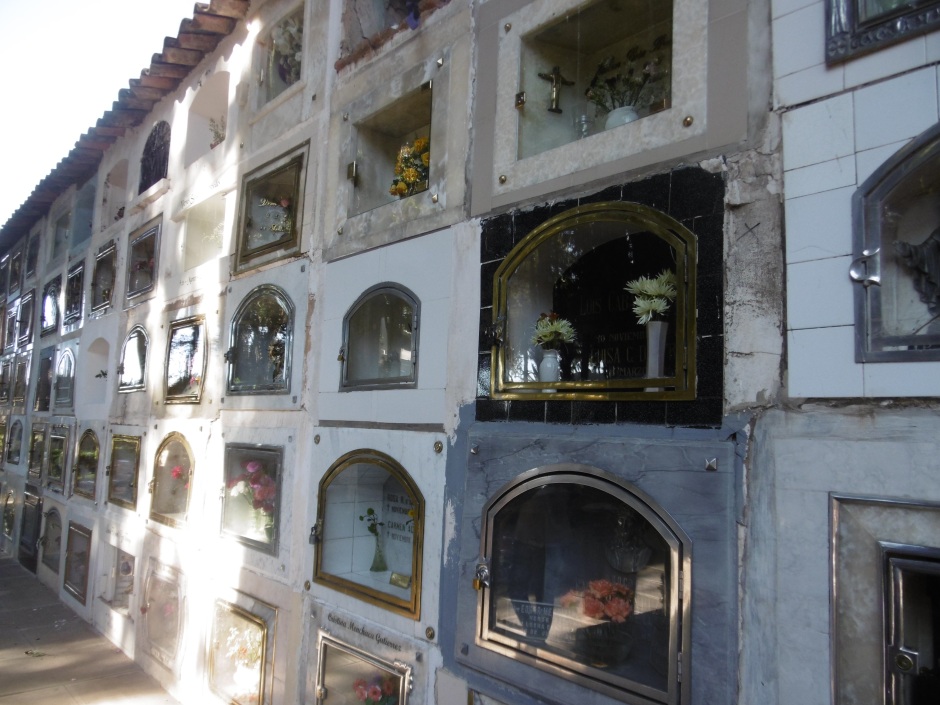 It was actually a sobering and fascinating experience in equal doses. The cemetery is essentially a mini-village for the dead. It’s beautifully shaded from the sun with palm trees and is a very peaceful, tranquil place.

The deceased are stacked five or six high in separate graves. Each have their own ‘window’ where relatives leave gifts, photos and kind words. Those that are rich, or considered more important, tend to have a whole tomb or monument dedicated to them. Some ex-presidents are buried here.

While walking the cemetery’s streets we saw a funeral procession walking behind a hearse, an old man tending to the grave of his 20-year old son (or so I assume this was his age going by the deceased’s photo) and a family placing a musical birthday card in their loved ones’ window. Some old ladies were chanting rhythmically while others merely sat in silence alone, only with their thoughts.

It’s particularly throat-catching to see the graves of children, who have a separate section in the cemetery, adorned with toys they’ll never play with.

I have mixed feelings about such places. In one respect it’s beautiful that people can go somewhere and feel close to their forever gone family members and friends, but also the graves must cost a small fortune. Isn’t remembering someone in your thoughts and heart enough?

According to Sucre Life blog: “each niche is rented for 4 years with the option of a single extension by another 3 years (at a cost of around $10,000 for a 7-year lease), after which time the body must be removed by the deceased’s family. If the family does not claim the body, it is removed to a mass grave elsewhere. This has been a contentious issue, with families who accidentally miss the deadline finding that the body has been removed and can no longer be retrieved.”

While in Sucre I convinced the hubby to do Spanish lessons with me, four hours a day for five days.

Well, one of the first things I learnt was that I’d been saying a lot of shit wildly wrong. For example, before our first lesson we’d had a long chat with a 10 year-old boy called Eric.

And then I said to him ‘encantada de concerto,’ which I later learnt is the most respectful way to say ‘nice to meet you’, something you say to your elder. He just stared at me wide-eyed like I’d truly lost the plot.

(BTW he said he liked playing football but couldn’t play it because he didn’t have a ball. And When I told him I was thirty he said: ‘huh? No, decinueve (19)” he’s clearly not too young to know that flattery truly is the way to a woman’s heart).

I was a bit concerned about little Eric because when I asked him what he was doing later he said something about ‘piso’ and pointed to the floor. I later learnt ‘piso’ means floor, so I thought maybe he sleeps on the street. Our Spanish teacher assured me that no kids or families sleep on the street in Sucre. They go out to work after school and sometimes at about 9pm in the street you see them crying because they haven’t made any money or enough money to take home to their families, she said. It’s very sad.

The Spanish lessons were very helpful. However, in a week we only covered present tense and one form of past tense – apparently there are fourteen regular tenses! To simplify how complicated the language is, every verb can change up to four to five times just in present tense depending on who you are speaking to – male, female, he, she, you, we etc. I really appreciate the simplicity of English grammar now. It’s doubtful we’ll be fluent by the time we leave but I’m determined to get as good as is possible in the time we have remaining.

I didn’t know that real life dinosaur footprints even existed, but apparently they do and you can see them in Sucre. So we did.

The dinosaur footprints at Parque Cretácico in Sucre were discovered by a concrete mining company, which is still excavating in the area. The type of rock the footprints were found on helped preserve them as well as save them from being churned up for concrete because that particular type of rock isn’t good for concrete.

The tour was brief, but interesting. The centre is trying to get UNESCO listed so they can get some money to properly preserve the footprints. There’s not much else to see at the centre. 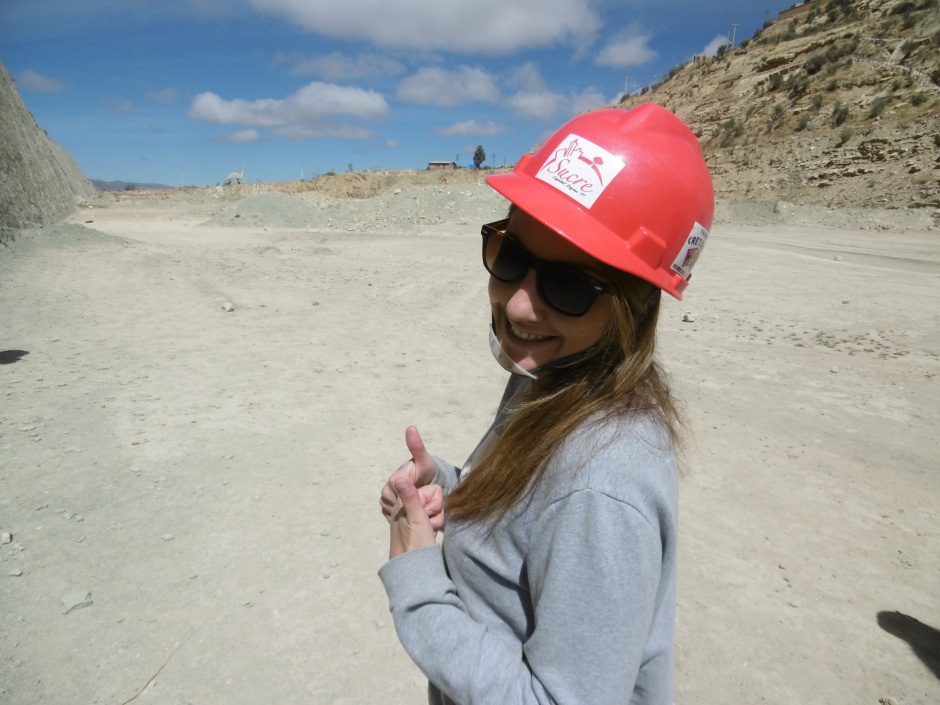 We also visited the House of Freedom where Bolivian independence was officiated.

I highly recommend doing the tour. The guide speaks excellent English and tells you the history of Bolivia while giving you a bit of a behind the scenes insight. Some interesting things we learnt were that even though Simon Bolivar, a Spanish man born in what would become Venezuela, won independence for the country in 1825, the new constitution didn’t recognise indigenous people. Therefore indigenous people were denied citizenship and access to healthcare and education. Instead they were sent to fight the many wars that took place after independence and which would eventually result in Bolivia losing half of its original landmass, including access to the sea and lucrative copper deposits to Chile. 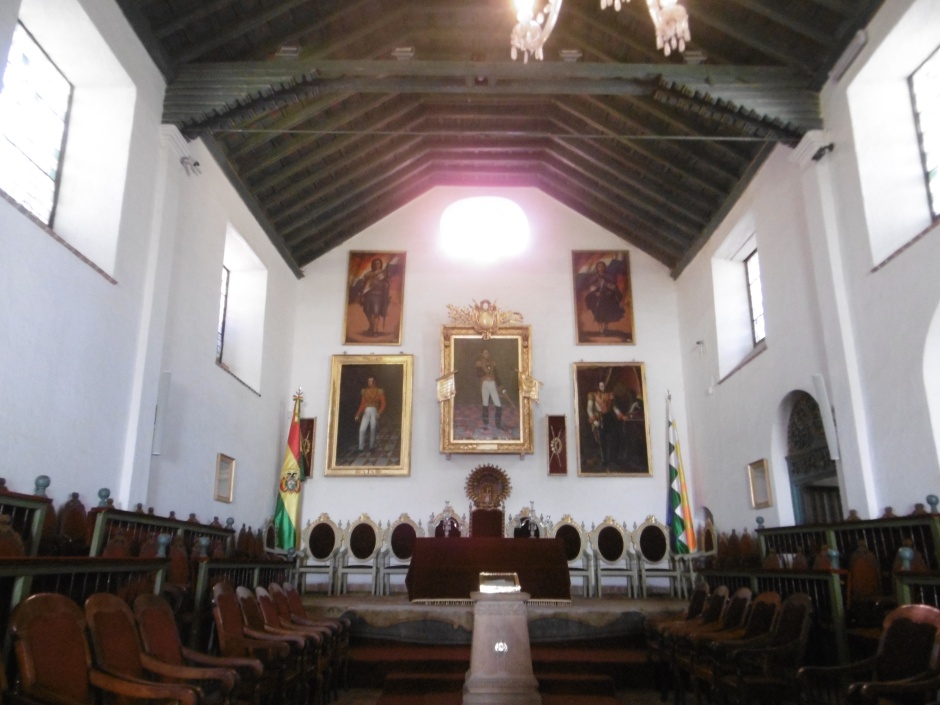 Even more staggering is that indigenous people, who make up around sixty-two percent of the population, were only given citizenship in 1953 – 128 years later. This was after a revolution that would greatly inspire and radicalise Che Guevara who was in the country at the time.

I found it quite poignant to look around the portrait room, which held portraits of every serving Bolivian president, and see a room full of ubiquitous white men stare back at me except for the newest president, Evo Morales, the country’s first ever indigenous president elected in 2004.

Up until this point on our trip our bus journeys in Bolivia had been reasonably good despite me expecting the contrary.

Our luck would run out.

On the overnight bus from Sucre to Santa Cruz we skimmed cliff edges on roads barely visible from darkness and red dust. When another vehicle passed our bus we actually had to stop because the dust left in its wake made it impossible for the driver to see anything. We were sitting at the front of the bus at the top so could see everything.

Eventually I managed to relax and fall asleep but when I woke up some time later, frozen to the core, I almost jumped out my seat as I saw another bus coming head on towards us only to for buses to move out the way at the very last second. This game of chicken went on for a long time until we finally reached our destination at 5:30am. Because we arrived so early the hotel made us pay for half a night (I haggled him down from full price) to access our room.

Food: Before coming to Bolivia almost everyone told us the food was terrible. And, well, often it does leave something to be desired, but what I learnt in Sucre, where there are lots of Western restaurants, it’s best to stick to the local grub rather than pay extra for mediocre Western food.

In the market we had delicious Chorizo sausage, bread, rice and vegetables for £1.50 (15 Bolivianos). And in an asado (barbeque) restaurant called Nouvelle I had ‘menu del dia ‘ of delicious soup to start, a decent portion of grilled chicken, rice, potatoes, bread, salad bar and jelly for dessert for £2.00 (20 Bolivianos).

Things to do: There are countless Spanish schools. We simply picked ours because it had the most suitable times for us. We paid around £3.50 (35 Bolivianos) an hour each. Prices vary but not by much. To get to the dinosaur park you can get a taxi for a reasonable price or take the dedicated bus that leaves from the main square infrequently.  There are also mountain treks and mountain or motorbike tours to do. Just ask in any travel office.