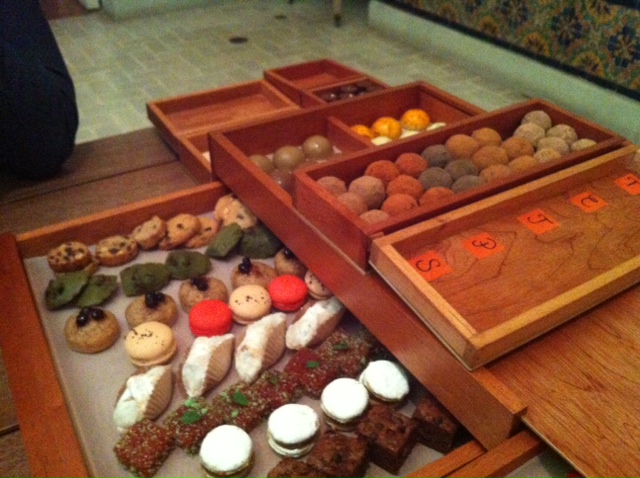 Picking only five was a challenge.

Peru is famous as a foodie destination, so before the hubby and I came to Lima we knew we wanted to try some high-end grub, so we booked ahead and budgeted accordingly (compared to London prices are reasonable but it’s far from cheap).

First on the list was Central by Virgilio Martinez (blog to come). Second was the  well-known and established Astrid y Gaston, named after the husband and wife team behind the restaurant.

It was this year named the 30th best restaurant in the world by The World’s 50 Best Restaurants in the World list .

Since it’s relocation to a 300-year-old Colonial house in the plush San Isidro neighbourhood of Lima it is easier to get a reservation. Even so, we booked a month ahead and were still not seated in the main dining room of the house but on the balcony area where old fashioned heaters fended off the cold. They did a good job, Lima’s winter is very mild, though for ambiance I probably would have preferred being sat inside the dining room.

We opted for the ‘Menu G’ thirteen-course tasting menu with wine pairing (385 soles/ £88 for the food and extra for the wine pairing, I can’t remember how much now, though I think it was around £40). There’s also a shorter, cheaper menu (240 soles/ £55).

Ironically then, the second dish – the homemade bread and spreads – was one of my favourites.  Ask any Western traveller and they’ll tell you Peru isn’t known for tasty bread, more like dry tasteless bread, but the variety and quality of the bread and spreads we were served were simply delicious. No dryness to be found, tons of moisture and flavour. It’s often hard to find good bread in South America so I was really missing some top quality ‘pan’ (bread in Spanish) by this point in the trip.

I also loved the limeno ceviche with sweet potato – clean and fresh. But with good quality fish it’s hard to go wrong with ceviche, the dish Peru is most famous for.

I didn’t like the sea urchin because I just don’t like sea urchin at all, it has a disgusting harsh flavour,  but my husband enjoyed it.

Surprisingly the vegetable ceviche was even better than the fish ceviche, the vegetables were crunchy and bursting with different flavours, many I’ve never had before. Don’t ask me what vegetables are in there because I couldn’t tell you!

Continuing with the Peruvian theme three types of guinea pig were served. Guinea pig is the Peruvian national dish and can be found everywhere in Peru. It’s typically eaten on special occasions. I’m actually not a big fan of the taste of guinea pig – it has a fairly strong flavour.

I didn’t like the steamed guinea pig because you could really just taste the meat and nothing else.

Other standout dishes included the suckling pig with quinoa and the pacific fish, fresh and perfectly cooked.

However, one of the best dishes has to be the pudding,  which was expertly put together and simply delicious. The cream was velvety and rich and the doughnut crunchy on the outside and soft and gooey on the inside.

The wine pairing was decent enough, though I’ve had better. There were a few too many sweet wines for my taste, though sweet wine is what Peruvians make and like to drink, so that’s perhaps why.  Also, I thought they gave rather small servings of wine for the price. As seems to be fashionable in Latin America, the pairing also included a beer . The waiter also promised to give us a list of the wines but forgot and I forgot to remind him.

The service was a little intense at times. Very unlike me I had a bad stomach (in my family I’m well known for inheriting my nan’s iron stomach. Let’s just say she laughed in the face of ‘best before dates’) but on this occasion I had to visit the toilet quite regularly and the kitchen clearly didn’t want to wait for me because often I’d come back and a plate of food would be waiting for me.

I generally prefer a relaxed service but apart from that everything was explained well to us.

On the plus side the toilets were lovely and the deserve a mention for being unusual. Similar to Sketch and the Crazy Bear in London they were pod-like and covered in mirrors for a confusing – it was hard to distinguish the door to each cubicle – but dazzling effect.

At the end of the meal we were presented with a big wooden box full of chocolates, of which we could pick five. I thought this was a very nice and memorable end to the meal.

Overall, I had a lovely evening and enjoyed 85% of everything we were served and would definitely recommend a visit.

The owner, Astrid Gutsche, also stopped by our table and checked if we were warm enough.

When we finally left the staff ordered us a taxi, but the taxi charged us 30 soles (around £6), which was three times more expensive than the one that brought us there. We felt like we were getting ripped off a bit there!

Also, please feel free to ask me any travel questions you may have or to share your own travel experiences.